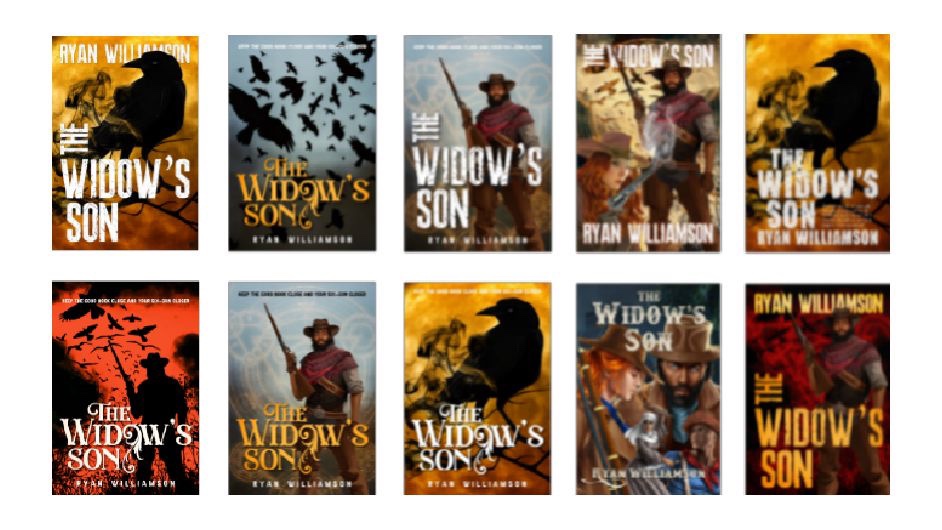 Finding the optimal cover design can take a lot of iterations. Sometimes you hit it out of the park with the first try, and sometimes it’s the tenth. Sometimes a cover looks great in full size, but becomes lost in a muddy blend of colors in the thumbnail.

For example, here are ten alternate covers I designed for The Widow’s Son.

All things being equal, at full size I’d gravitate towards the more illustrated covers, especially the one with the stylized typography.

But which cover invokes a feeling of the Weird West best? Which fits the genre? Here are thumbnails of popular Weird West/Western Horror novels, with a couple of my designs slipped in.

Most important, since people will be seeing the cover for the first time as a thumbnail on Amazon, which stands out the most?

Unfortunately the stylized topography is almost completely lost in the thumbnails, and the illustrated covers just don’t stand out as much. The red covers are good contenders, but most covers in the genre are more earthy tones, and they might look out of place. I’m not convinced though.

If the market was bookstores with physical copies the decision might be different, but for a Weird West novel that stands out from the crowd without looking out of genre, I think there’s one clear winner. I’ve swapped out covers a few times, and it’s definitely the best seller.

That said, there is one possible contender I haven’t tried yet that might be worth considering.

Looks good in full size and still stands out as a thumbnail. Probably worth an A/B test.

Which cover do you prefer?

Ryan Williamson is a former US Army Cavalry Scout living in the Pacific Northwest. He is the author of numerous short stories and the novel “The Widow’s Son,” a top 10 seller in Western Horror Fiction. In 2015 his short story “Little Mouse” received an Honorable Mention from the Writers of the Future contest. Ryan enjoys coffee, motorcycles, cowboy guns, and long walks with coffee. View all posts by Ryan Williamson

This site uses Akismet to reduce spam. Learn how your comment data is processed.