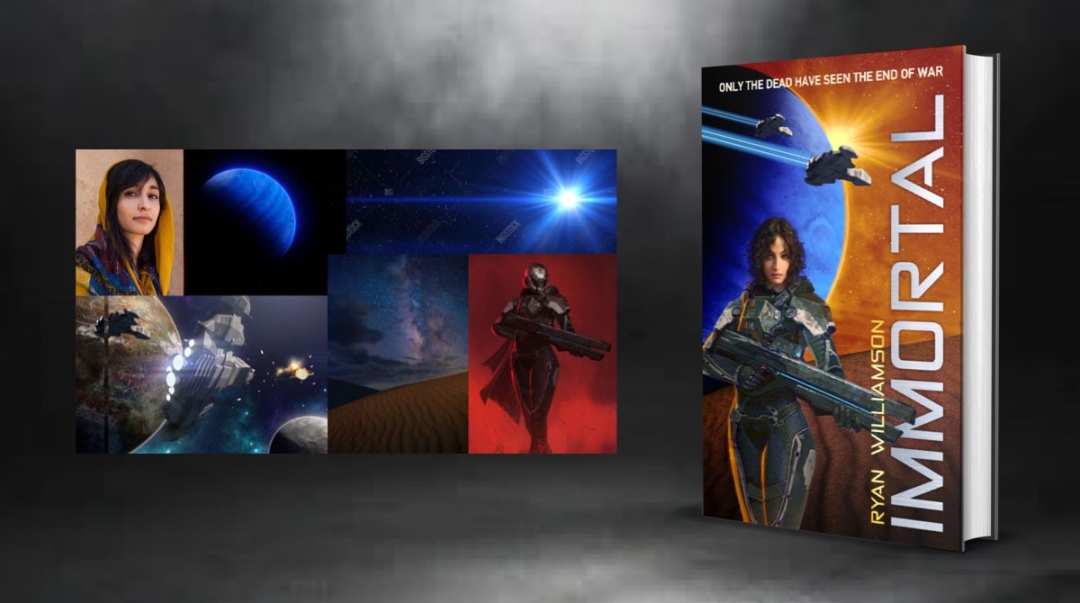 I’ve been planning on rewriting the serial Destroying Angel I released on Kindle Vella. It’s a good story, but it could be better. There’s a lot more I want to add to it. I’ve decided to retitle the pending rewrite as Immortal. I’m still in the early stages, but I always enjoy making concept covers for my works in progress. I find it inspirational. For Immortal I was playing with a concept of rotating the title and byline 90°—having them run up the side of the cover instead of the more traditional horizontal treatment, which I’ve been getting bored of. All I knew starting out is the cover had to incorporate a couple key elements: a desert world orbiting a gas giant, and a female soldier.

This was my first concept. I liked the title treatment, but it was a little heavy on the left, and didn’t feel balanced enough. So I experimented with moving the title to the right.

Much better. I especially like how the sunburst lights up the top of the image, and the spaceships add a nice extra bit of balance to the image and Military Science Fiction feel. In the story the desert moon has a long day/night cycle, and the system’s primary star is eclipsed by the gas giant every dawn, so the image ties in with the content.

Next I played with different potential poses for the featured character on the cover.

While I was mulling over the character design I started on the final background art, incorporating three images.

Next I worked on masking out the star fighters I wanted rocketing over the gas giant at the top of the image.

Partway through I noticed I hadn’t caught all the artifacts in the sunburst, so I had to clean those up.

Next came the character design. I fell in love with an illustration by Polish artist Vladimir Buchyk, but I wanted the character’s face showing. She’s of Persian decent, and I found a model that fit my image of her perfectly.

Work on removing the helmet came next…

I also added some wear and tear to the armor for effect. It’s subtle, but I think it goes a long way.

Add a little FaceApp magic and we’re in business.

Tying all the elements together required some digital painting to hopefully make it look less “photoshopped” and more an integrated piece of artwork. I produced the art with enough bleed for a hardcover. The shaded are you see is bleed, and the crop is for a Kindle cover. There’s enough space to play with for hardcover, paperback, and eBook versions of the cover.

Finally I took my renderings (which at this point I had made exclusively on my phone!) into Photoshop and added crisp fonts, cleaned up a little more of the image, added a perspective blur to the desert background, and finished it off with an oil paint filter to the image to give it a more cohesive feel and clean up any pixelization on the images.

At this point it’s still a concept, nothing more, but I’m really happy with it. Happy enough I could use it as the final cover art. At the moment I’m trying to hunt down Vladimir Buchyk to get permission to use his armor. If I can’t I’ll have to think of something else. There’s still a good chance I’ll commission an artist to do an original illustration based on this concept. Time will tell. In the meantime I’ve got to work on the rewrite!

UPDATE: Still no luck tracking down Vladimir Buchyk, so I set about creating an alternate cover. First I generated a backdrop and portrait with an AI art tool.

I didn’t like the helmet, so I did some digital painting to remove it.

I think I like the new alternate cover even better than the original!

Do you have a book that needs a cover? I’m open for commissions. You can check out my other covers here.

Mr. Williamson is a former US Army Cavalry Scout residing in the Pacific Northwest. He is the author of numerous short stories, the Top 10 Western Horror bestselling novel “The Widow's Son,” and the serialized military science fiction novel “Destroying Angel” (exclusively on Kindle Vella). His short story “Little Mouse” received an Honorable Mention from the Writers of the Future contest. He enjoys coffee, motorcycles, cowboy guns, and referring to himself as Mr. Williamson View all posts by Ryan Williamson

This site uses Akismet to reduce spam. Learn how your comment data is processed.